I’ve been playing with E-UAE lately on my Amithlon system.  I was having serious issues with launching it and it, 99.9% of the time, immediately hard-locking my system.  It was extremely annoying and frustrating to constantly have to reach over and hit the reset button and wait for the BIOS boot, then the small DOS partition to boot and then Amithlon booting into AmigaOS.  I was using the latest version, E-UAE-0.8.29-WIP4 with all these issues so I decided to try an earlier version.  I found E-UAE-0.8.28-RC2 on Aminet.net and gave it a run.  Perfect.   Launched successfully every time, regardless of opening a window on the Workbench screen or opening it’s own screen.  3.1 ROMs, 1.3 ROMs……it worked.  I did notice that it is slightly slower than the latest version (of that .1% times it launched and let me run SysInfo v4.0).  However, it still runs the emulated setup faster than an A500 and an A1200 which should cover most games.   I was able to get FA 18 Interceptor (one of my favorites) to launch and play, both on a stock A500 setup and on a memory added A1200 setup.  I’m still trying to figure out WHDLoad and the E-UAELoad install so far now I have just configured two setups, an A500 (ecs_agnus) and boot floppies (.adfs) and an A1200 (aga) with 8 MB ram and boot HD (.hdf).

So nice to have an extremely fast AmigaOS system (Amithlon) that can now run some of the custom chipset software as well. 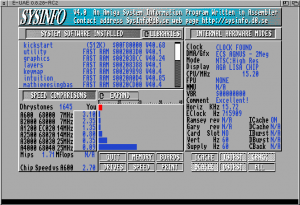 So with very inexpensive parts from the CPU, MB, RAM and old PCI cards (graphics, sound and network), I a very capable system running AmigaOS, and then E-UAE to handle the occasional custom chipset requiring pieces of software.