I’ll post the journey I’ve had with Amithlon, from hardware I’ve used, installing issues and tweaks and eventually to compiling the kernel based on Milan’s “Kernel 4” tree.   Make sure to visit http://amithlon.snkbitten.com/ for downloads of patches, kernels and miscellaneous files.  Lots of internet searches and hardware experimenting to make your journey easier 🙂 – SnkBitten

A quick search on Google said that disabling the Hypervisorlaunchtype would do the trick so using an Administrative command prompt I ran  “bcdedit /set hypervisorlaunchtype off” and rebooted.   Presto, my virtual Amithlon systems functioned again.  I have no updated to VB 6.1 yet as this is working just fine.

My suggestion is to use VB 6.0.22 and make sure hypervisonlaunchtype is set to off.  I have just configured a new system and patched, now it’s installing the additional devices/drivers (USB and Audio).   I’ve already setup networking and have been pulling over files from my NAS box as needed.

Great news, AmiSSL 4.6 was released with added support for Amithlon.  It is one of the options when installing so make sure you select it.

IBrowse 2.5.3 was also released with a few coding tricks to make it faster.

I’m still working on updated guides, this is going much slower than I expected as I haven’t had a lot of free time this year.  Fingers crossed I’ll get to dive in and wrap them up soon.

I finally had some free time and started updating the installation guides.  They’ll be very similar (a lot of copy/paste) but restructured to make things flow better.  I will break up the guide a little more with ‘installing Amithlon’ and ‘patching Amithlon’ being the main guide and then supplemental guides for Audio, USB, Networking, etc..

Hopefully this will help people have Amithlon booting off their hard drive and running the latest patches before jumping in to changing out kernels and installing USB or AHI, etc.. while keeping the guides shorter to make them easier to reference just what’s needed.  I’ll also add setting it up in Virtualbox and the configuration needed for audio, usb and networking.

There have been some errors I’ve discovered in the current guides so those will be corrected as well as a few new things added I’ve found/learned/read over the last few years.

Hopefully I’ll have it ready in the not too distant future. 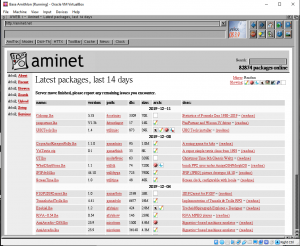 Time for an Installation Guide Revision/Update

I was working through my guides while installing Amithlon in Oracle’s Virtualbox.  Doing so showed me I needed to add quite a few more steps and do a bit of re-ordering of some steps.   I found myself jumping between the Installation Guide, Part 2 of it, the misc notes/information document and some of my own previous blog posts to get a nice standard base configuration.   I’ll try to spend some time during the upcoming holiday seasons to to a rewrite.  At the same time I’d like to rebuild my main system again.  It’s been awhile since installing and I’ve done so many changes I’m not sure what’s what anymore.  Kickstart 3.1.4.1, WB 3.9 +BB2 + WB3.1.4.1, etc..   Installed this, removed, installed that, removed and repeat numerous times.  I’ll have to take time to record a lot of my settings and configurations before doing that…..so first will come the revised installation guides.

I’ll probably combine all the install guides into one and keep the Kernel and related guides still separate.

Amithlonblog is back!  It’s been a few months but hopefully it’s up for good now.  I still have some tweaking to do after importing the last backup I had from March 2019.   Site software is a newer version and I’m having a little difficulty getting the same look I previously had….plus trying to remember the previous look 🙂

For those interested, I’ve created a .dat module for SysSpeed on my Amithlon system you can load in to SysSpeed v2.6 and compare against your system. I uploaded it to Aminet, here is the link to it..

Rendering a scene downloaded from Aminet.net on my Amithlon system. It’s by “Muadib” and he remodeled Sean Kennedy’s Viper MK2 model to work with the Amiga version of Lightwave, and setup a few scenes using the modified model as well as some of his own creations.

This is the scene “ViperMk2_Promo_Flyby.lws” which rendered with the configured scene settings, out to 24bit IFF files in around 5 hours on my Amithlon system. I then converted the frames on my PC from IFF to PNG and compiled them into an .mp4 video.

I followed the script (definitely don’t execute it on Amithlon) as you need to make sure the appropriate Amithlon files and startup-sequence commands are retained.   This provided me with my already configured 3.9, plus Boingbags 1 and 2, with all the updated/upgraded functions of 3.1.4.  New libraries, new devices, new drivers….new kickstart.   You will need that modified kickstart 3.1.4 (removed battmem.resource and battclock.resource), I had to copy the older printer.device (I’m using netprinter and that may have caused issued with the new one) and the same CacheCDFS system for the CD drive instead of the new CDFileSystem 3.1.4 has.

So far it’s running well, boots faster and I have so much less patching taking place as most of the patches aren’t needed.

Just booted the system off the latest Kickstart 3.1.4 and Workbench 3.1.4.  Definitely a bit of effort involved but it works.

I replaced  the kickstart in smallird.gz with the A2000 3.1.4 Kickstart and installed WB 3.1.4 in WinUAE to give me the files for setting it up on a partition in Amithlon.  Compressing the new sys: partition to an .lha and then uncompressing that on a volume on my Amithlon I was able to boot off Kickstart 3.1.4 and Workbench 3.1.4.  I will continue to experiment with it and see how it compares with 3.9.  I have a lot to setup/configure still….. 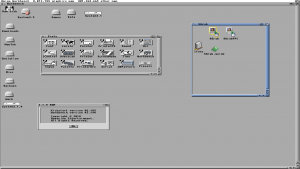